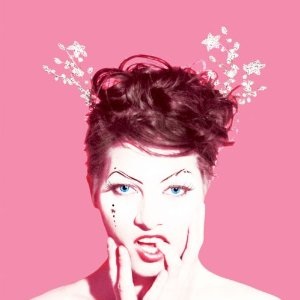 Did you honestly expect that a bisexual, performance artist, serial Tweeter and former Dresden Doll, who is also the wife of fantastic gothic writer Neil Gaimen, could produce an album that is anything other than absurd?

Of course not. I hope.

Just because the album is absurd, it doesn’t mean it’s bad. Far from it. Theatre Is Evil is a great, definitely-not-Dresden–Dolls-esque romp that shows  that Amanda Palmer (and the Grand Theft Orchestra) can produce music from absolutely nothing.

The album started from a desperate plea by Palmer herself, tweeting that she’s creating a Kickstarter project to help fund her new album. Asking for only a few thousand dollars, news spread fast and became the seventh project to break $1 million, making it the highest funded music-based Kickstarter in history.You can tell, as well.

The production is first class. There’s a lot of mess all conjoined to make music that sounds like Regina Spektor and Voltaire getting caught in a washing machine. Each note of the many instruments used is clear, even if there are many going on at once. It wouldn’t come as a surprise if the dreaded ‘More than one listen’ philosophy would appear for many people but when it clicks, you’ll have the hooks and riffs in your head for days to come.

The opening ‘Smile (Pictures Or It Didn’t Happen)’ is a deliciously poppy affair that combines piano, synth and devastating drumming to make your speakers push themselves to the limits to hold it in. You can just imagine a petite Palmer hammering herself on the technological innards just to say she had it on her album.

When the album progresses to the hauntingly beautiful ‘Trout Heart Replica’ and ‘The Bed Song’ (featuring the best lyrics on the album), it shows that powerful music does not necessarily come from frantic loudness. When you go from foot tapping to wiping away a tear within a few simple seconds, you know that your heart is in her hands.

Don’t get mistaken, Theatre Is Evil is a fun album. It’s the simplest way to describe it. The first single, ‘Do It With A Rockstar’ is a tour de force of maniacal wailing and pounding that is oh-so typical of her baroquian ancestry and linked with the sampling of legendary ‘My Sharona’ in the amazing ‘Melody Dean’ , shows that her love of music has returned. It’s a pleasure to see Amanda Palmer doing music again, away from the side projects that raised more than one eyebrow.

Fans of Palmer will lap every single melodramatic second up and will have the album on repeat for years to come. Naysayers will probably maintain their stance but even they wouldn’t be able to be miserable while Palmer sings her guts out. A great album, and one that shows that Palmer can back up her words.

And that is the most important thing.