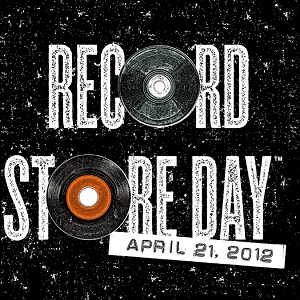 The fifth annual celebration of the UK’s independent sector took place on Saturday (21st April). Record Store Day 2012 saw in-store events across the country, the release of special singles and albums, a new ambassador and the launch of a new music chart.

Iggy Pop was named ambassador of Record Store Day 2012, he spoke to NME.com about the accolade in his patented demure style (sarcasm implied) saying “As Record Store Day Ambassador for 2012 I feel like a representative from some exotic jungle full of life and death and sex and anger, called upon to wear a leopard skin and translate joy to the world of the dead.”

He continued “A person should have a personality. You won’t get one dicking around on a computer. It helps to go somewhere where there are other persons. Persons who are interested in something you are. That’s how a record store or any shop that’s got some life to it should work. It’s not about selling shit.” What I learnt from this is Iggy Pop won’t be reading this any time soon because lets face it, we’re dicking around on computers.

Prior to Record Store Day 2012 a new music chart was launched based on sales in independent music stores on April 17th by the Official Charts Company. The chart was read out after the first week, on Steve Lamacq’s BBC 6Music radio show, which you can listen to here.

The new chart will hopefully represent music fans who cherish physical music, rather than the tweenage masses who are swayed by reality TV show winners and lacklustre, unchallenging pop. Though some music can transgress both markets as Lana Del Rey‘s debut album Born To Die topped the chart as the best selling album in independent record stores, so far in 2012.

I’m a supporter of independent music and attended the event at Rough Trade East where Keane headlined following performances from Johnny Flynn, Wet Nuns, Becoming Real and Little Boots. Keane played their older fan favourites, along with new material and their latest single ‘Silenced By The Night’. For a full list of the day’s events in the UK you can head over to the official website here.

Releases for Record Store Day 2012 included remastered classics on vinyl like The Clash‘s London Calling, to new releases from the likes of Arctic Monkeys, Kasabian and The Vaccines. You can see the complete list of exclusive product here.

Keane – ‘Silenced By The Night’

Did you buy any exclusive releases? What was the last physical piece of music did you buy? Rough Trade East or Rough Trade West? Record Store battle! Sides will be taken, vinyl drawn. Pick your side.