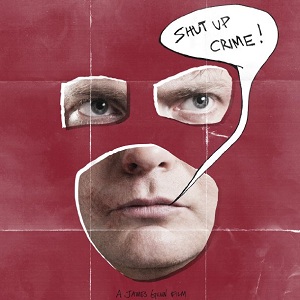 In this film, a wife leaves her boring husband. The husband has an epiphany and tries to become a super hero. Violence ensues. This leads me to say something I don’t like; whilst Pirates of the Caribbean 4 was a bad film, or at least a very bland one, it was consistent. Super is not. I cannot remember the last time I saw a film where several hours after it had finished, I couldn’t decide if I liked it or not [Update 2012 – I still have no clue].

I’ll get the easy stuff out of the way before dealing with the meaningful analysis. The plot is not deep, but it is very astute in its simplicity. Maybe a little predictable at times, but this predictability is usually subverted in some way, usually quite gruesomely. The characters are similarly rather realistic in their utter believability, although many hats off to Ellen Page who clearly throws all her energy into a role she must’ve enjoyed and really comes through as a consistent scene-stealer. There are also a few scenes where she’s in spandex, if you’re into that. Whilst at times it feels like it maybe isn’t going anywhere, it promptly changes and avoids any feeling of it perhaps taking too long to do anything. Plus is has Nathan Fillion as a fictional Christian super-hero (it’s better AND worse than it sounds).

How it fails though is not in a “this makes it a bad film” kind of way, but more “Here, watch me try and jam two jig-saw pieces together that don’t fit”. The critical reasoning behind this is an overwhelming lack of consistency. The film is very much a dark comedy, but the balance between these two is often miss-placed or completely forgotten about. At times, it is simply comedic, at others, it is pretty bleak. Dark comedy relies on really mixing the two up so it’s hard to tell where one ends and the other begins. In this case, Super largely fails. It is perfectly happy to not shy away from pretty visceral action and look to dismiss the comedy so to become a bit more meaningful. Fine, but then don’t a few seconds later add comic-book inspired imagery on the screen. Give the audience a chance to react before telling them how they need to be feeling.

Case in point, there’s a very gruesome depiction that lasts for no longer than a second, if that, near the end of the film. It is a thoroughly depressing shot that causes audible gasps from the other people in the cinema. It opens up a roaring rampage of violence which is subsequently followed by comic styled written sound effects. It doesn’t feel right. When you start to burrow deeper, you notice some other issues as well; one character goes ignored despite being fairly important, relative to the world they’re in, with absolutely no mention made of their existence again. Given the role of that character, this makes no sense whatsoever. And then there’s use of rape which can’t really be discussed with spoilers, but I didn’t really see it used effectively as a tool to get me invested.

Then you have the problem of what happens when you inadvertently make the main bad guy quite likeable although still assertively bad in contrast to the hero. It really screws up your perception of things. I look back now at what the hero did; whilst (most of) the people attacked had committed crimes, the belief in justice was completely skewed and wayyyyy disproportionate. I don’t mind that the hero isn’t really a nice guy, because he really isn’t, but in a typical bad guy telling good guy “You’re no better than me” thing, it really highlights that no, he definitely wasn’t.

The fact that some things happen that I didn’t want to is fine in the sense that okay, I cared about the characters, but in most cases it was the way it was done. This film best compares to for me is In Bruges, based off pacing, characters, etc., but I can say I definitively enjoyed In Bruges. The inevitable outcome is just a lack of recall about it all. Perhaps worse is that I likely won’t care.

At times, the content was enjoyable, the script sharp and the direction amusing or well done, but there were other times that left a greater impression on me, those being “Whoa, I can’t believe they did that.” I don’t mind dark, gruesome or vulgar, but Super tried its best to include them in equal measure and I don’t think it pulled it off well enough. As an indie film with little advertising behind it and a limited release, it’ll no doubt pick up a cult following based off its strengths, but for me it proves that sometimes the gloss of mainstream isn’t necessarily so bad.