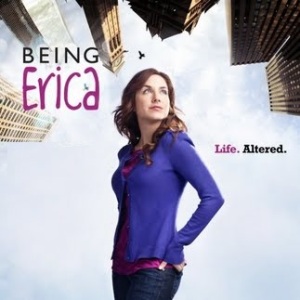 My Femme Friendly Club is full of mature feminine Entertainment, it may not be fashionable (much to my sadness) but it can make you feel empowered and mature. More of it please.

This fantasy drama is another example of ole lady viewing and by that I mean a mature woman can veg out to, with a female lead character who’s strong and witty. In essence this kind of show isn’t watched by or aimed at younger women, who don’t seem to have a role model or at least they don’t discuss watching this kind of show. It’s a shame.

Erica Strange (Erin Karpluk) is struggling to find herself in Toronto. She can’t find a career direction; she’s unlucky in love and she is haunted by a long list of regrets. After collapsing from stress, Erica wakes up in hospital and meets Dr. Tom (Michael Riley), a therapist, who offers her the opportunity to send her through time and re-do every regret. Time travel and emotional depth, an unbeatable combination.

The third season of Being Erica introduces new characters as Erica enters the second stage of her therapy, group. There’s also further depth given to her family, friends and co-workers. Though fans of the show won’t be disappointed by the return of Kai Booker (Sebastian Pigott) to throw a spanner in the works. Plus the array of tottie that trots through Erica’s life including new love interest and fellow group member, reformed bad boy Adam Fitzpatrick (Adam Fergus).

Group therapy offers new and interesting challenges for Erica as she helps others deal with their regrets. Erica also faces new obstacles as she begins her own publishing company with Julianne (Regan Pasternak) as Brent (Morgan Kelly) tries to sabotage them at every turn.

Erica struggles to come to terms with her new role in therapy as part of a group, her role as a business owner and juggling relationships both family and friends. She then finds out what the third stage of therapy entails. Though to move on in therapy, Erica faces the most testing sessions so far. Even Dr. Tom is seen to be struggling through his own therapy as we get sneak hints into the structure of therapists.

If you haven’t watched any of the show I recommend back tracking because the Being Erica uses a complex concept. If you are looking for a modern Quantum Leap then youhave found it, if somewhat more girly. Now we just have to be patient for Series 4 but it looks like there are still lots of exciting parts of therapy to explore.

The moral of Being Erica is learning how to make good decisions, whether the outcome is perfect or not and not everything is as it seems. So make the right decision and check it out this summer before the fourth series takes to our screens.